We need every swinging Dick & Jane to man the walls. 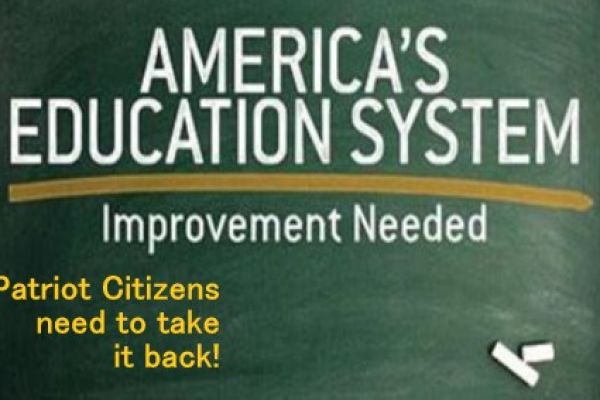 3/7/2020 Gab post and The S2 Project Commander's reply.
@JDGray on gab.com ;
All three branches of the federal government have been destroyed by partisan politics.  Corrupt politicians with personal agendas have stolen this country from the Founding Fathers and anyone who believes in the Constitution.  A lawless ruling class of traitors have embedded themselves into the fabric of government and they refuse to yield to common decency and sense.

If you're over 50, the America you grew up in is just a fond memory.  It no longer exists.  Without term limits to recycle career government leeches, and their efforts to erase our history, we'll soon lose touch with who this country was and what we stood for.  Can we vote them out of office?  Can we rediscover our America?  Only time will tell, but time is not on our side.

The S2 Project Commander's reply.;
@JDGray  K-12 education system was not mentioned in your post. I do agree. But the longer I investigate, the more information I find, the more money I follow, the k-12 education system nation wide is the crack in the socialists armor. As the highest tax payer expense and one of the major goals of the Leftists; if the Patriots can take that away from them, it dooms their future in America, not promotes it. Who we are gets lock in by age about 7. Programming if you will. Put it down to the question... Who is doing the programming of young minds?
And it can be take away from the anti- American proctors.
IF
And a big if it is. The Patriots, the average person, Citizens, start taking action. We are in a period in America of civil sloth. Empty sets at town hall and school board public monthly meetings. [MSM] is winning the distraction war with what's on TV being a higher priority than what is going on politically where they live. To prove it, ask 5 people in your town /city, "Who is on the council or school board?" Chances are you will get 5 "I don't know."s. Government left on auto-pilot is self imposed tyranny. How we rediscover America starts with our front doors. Our back yards talking with the neighbors over the fence. Asking the hard questions & listening the answers with intelligence not anger or fear. Our Communities are our forts and we need every swinging Dick & Jane to man the walls.

Posted 5 months ago by S2-Actual, Chris

No comments yet! Why don't you be the first?